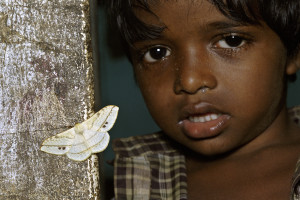 “Art Returns, a programme that takes art back to the community, reconnects through photo archives with the forest people of Anappantham, before and after a landslip changed their lives.”

It was chasing the chocolate albatross, the delicate white and yellow butterfly, that led Unni Pulikkal reach deep into the forests of Anappantham. Training his camera, while in search of the evasive winged creatures, he often found himself among the dense jungles of Vellikulangara Reserve Forest, off Thrissur.

It was on those trails, undertaken as part of a project to photograph and document butterflies of South India, that he encountered the Kadar tribes, the isolated inhabitants of the forests.

By 1999 Unni became a familiar face, a friend from the outside world, and slowly overtime they consented he take their photographs.

He caught the raw charm of their way of life- food, dressing, faith, shelter and relationships- of men women and children of the 15 families, archiving them minutely. He became a contact, a point man, to the mysterious life beyond their cocooned world, marking their day- to- day existence indelibly in print, every year. Titling the work ‘Faces in the Forest’, Unni catalogued the rare nuances of the tribe.

Six years down the road, one stormy June in 2005 Anappantham saw its worst natural calamity when a landslip quickly buried the mud huts of the forest people, sinking two of them deep in earth.

The rest, rescued by forest guards, were relocated to a temporary shelter, in a school in Vellikulangara, and later in a permanent settlement in Sasthampoovam.

The tragedy scarred families coped and adjusted to new surroundings and with the passage of time began life anew. Simultaneously, Unni, a medical doctor by profession and a lens man by passion moved on to establish PhotoMuse, Kerala’s first photography museum, making it a focal point of all things related to photography. With it he established a network of photographers across Kerala, India and internationally, all the while archiving the lives of the people of Sashtampoovam. In several trips to the forest he was accompanied by Herbert Ascherman, Jr., the well known American photographer and his friend.

This June, PhotoMuse began Art Returns, an ongoing series of exhibitions, where pictures and portraits of communities are shared with the participants. ‘Faces In The Forest’ was taken back to the tribals and once again they travelled back in time. As community members saw the time-worn portraits projected on screen, the atmosphere was surcharged with emotion. Echikutty began to weep.

“This is my mother. She died seventeen years ago when I was a small girl. This is the first time I am seeing a picture of my mother ever after,”she sobbed.

Saritha was a small girl in a group photograph taken in 1999. On inquiry of her whereabouts Unni learnt that she was buried in the landslide, along with her mother.

“I feel sorry I could not take her mother’s photo. She was born and died without a trace. The significance of documentary photography is that it preserves social and emotional significance of people, however insignificant a person may seem to be. Someone who is nothing to us maybe everything to someone else.”

Unni continues to document the community diligently. His idea of taking art back to people stems from his belief that art should not remain within galleries or in the computer, but should connect with those who inspire it.

Meanwhile things have changed with the forest people. The 15 families have grown to a healthy 60 and now live in improved conditions. The photographs remain a proof of the change that has come upon them, of how they have turned urban.

“Their costumes have changed. The youngsters are modern. They wear jeans and tops and use mobile phones. Some are employed by the Forest Department. Their socio-economic status has improved. The photos show the evolution of a community over a period of time,” says Unni adding that sadly the young generation does not engage with it as it is not a glamorous genre.

Unni Krishnan Pulikkal began as a painter working with watercolors and oils. Along with studying modern medicine he was drawn to photography. The two genres that he pursues professionally are documentary photography and photo-based art. Currently he is set to exhibit, West Meets East, (from August 3- September1) along with Herbert Ascherman Jr. exclusive Platinum prints of abstract and surreal imagery captured in India, Berlin and New York in a collateral show at the ongoing Cleveland Triennial for Contemporary Art.
https://www.thehindu.com/life-and-style/art-returns-reconnects-with-communities-using-archival-photographs/article24581506.ece